Proof of My Old Womanhood

Please welcome, friends and fellow bloggers, the latest addition to my household: 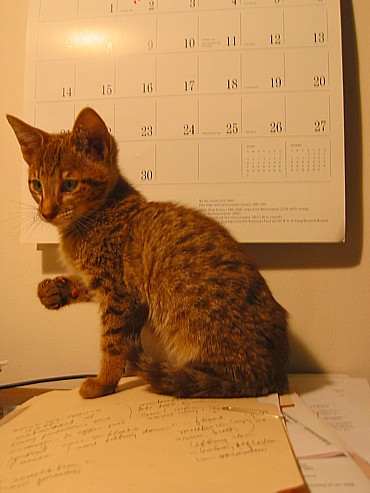 He arrived on Saturday, is 11 weeks old and his "sensible, everyday name" is Oliver - maybe called Ollie; we don't know yet. And, as he should, he is keeping secret unto himself his

For such a little guy, he knows a lot. He figured out the litter box right away without a single mistake. He knows where his food and water are and he made it clear the first night that a bed with a human in it is a lot more comfy than a box with a towel, so we've ditched the box already. He also has a strong voice. He complains loudly if I go into another room and he behaves, in general (as kittens are required to do by law), like the Energizer Bunny - with pretty much the same attitude.

Oliver is a Savannah, a hybrid, about 15 percent serval - a medium-sized wild cat native to central Africa - and the rest, Serengetti and Bengal, two relatively new domestic breeds. I don’t believe in keeping wild animals, nor in breeding them with domestics. But these grow up to be so damned beautiful and this little male became available when I was looking for a new feline friend. It is not the only contradiction in my life. 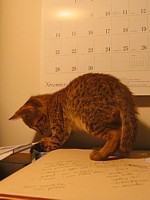 Savannahs grow to be huge – twice the size of average housecats. They are friendly, active, talkative, but docile – that is, they complain loudly when irritated, but they don’t scratch or bite. Sort of like Crabby Old Lady. They love to play in water and they like to be walked outdoors on a leash. I haven’t decided yet if I will do that; there are a lot of big dogs in the neighborhood who don't even like each other.

Cats and old ladies seem to go together. There was, 20 years ago, an old woman who crept into the neighborhood at night to feed the strays in the empty lot across the street. She disappeared with the cats when an apartment house was built there and I choose to believe she moved on then to care for stray cats elsewhere. And we all know stories of old ladies who live with 27 cats.

It is my fear of becoming that crazy old cat woman everyone points at that has held my personal cat population to one-at-a-time over the years. The beauty of cats takes my breath away. The pleasure I gain from their appearance, grace and attitude - and watching their own pleasure at those same attributes - never wanes; it has never been easy to resist adding more. 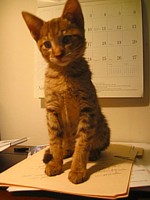 Some people say two cats are better than one, that they keep one another company when you are away, and I have in the distant past kept more than one. But none of my only-cats ever complained nor appeared to be lonely – after all, cats sleep 17 hours a day - and one died in my arms eight years ago at age 20, having hated every other cat he had occasion to encounter during his long life. So the Bennett household will remain at one cat, two humans – if you count Crabby Old Lady.

And now that I have, with the acquisition of Oliver, officially entered into the company of old womanhood, let us rejoice.

I'm delighted that you have such a beautiful new companion. If this cat walks on a lease, you have the best of all possible pets.

What a cutey! How well I know the urgent, demanding voice that the little packages can encompass, having a smaller version (a torbie named Jelly--from Jellical which I had forgotten was a black and white!) with a huge voice. May you and Oliver share a long and fulfilling partnership. (Give him an ear-scratching for me.)

He is a beauty. I hope you and Oliver have a long happy companionship. Someday I will get my own cat.

I used to write a lot about fearing that I'd become one of those old women with too many cats. Now I sort of embrace that image of myself in the future. I'm engaged, and happily in love, but if I do find myself single and alone in my silver years, I'll happily share those years with felines. :)

"Absitively posolutely" the cutest little fellow I ever saw!

Let the cat tales begin! Move over T.S. - Crabby and Ollie have something to say!

Oh, Ronni, he's gorgeous! Will he really grow to be 20-25 pounds? I love the idea of having a cat who would walk on a leash. I'm looking forward to reading stories about your adventures together.

Gosh, seeing that photo shocked me ... I had two cats until Monday night. My Sapphie was killed on the road. She loved to roam ... she was just a street tabby ... but starting to show real affection without being soppy. I will stay as a one-cat-woman for a while I suspect.

Ronni and Ollie, I like it!
Congratulations!!! Ollie is beautiful!

Loverly! He appears to be a charmer, and I'm smitten. Congratulations, and please scratch behind his ears for me.

Congratulations on the arrival of Oliver. He sounds like the perfect companion.

Our two cats, which appear regularly on my weblog, provide daily entertainment and affection.

We can all use lots of both.

My daughter may be on a dangerous path. She loves cats, and has six of them. Does it get worse over time? I hope not. We have always had cats around our family, they are the best of freinds.

Takes a creature this beautiful to cheer me up from election results! Congrats on a gorgeous addition to your family.

He's wonderful! I hope that you'll share pictures of him in the future.

I had a seal-point Siamese for 18 years, and on the very rare occasions when we tried a leash on him, he would walk down the hallway, leaning at a 45 degree angle against the wall, trying to scrape the leash off.

The comments to this entry are closed.