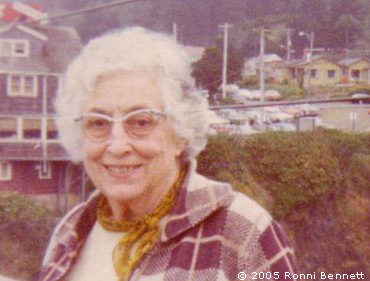 [1975] After she had retired a few years earlier, Aunt Edith joined a gym. She said she wanted to be thin again before she died. The pounds were coming off, but she was losing weight on only one side of her abdomen and the surgeon removed a three-pound malignant tumor. I spoke to her when the anesthesia wore off and she was laughing already: “Ronni,” she said, “this is the hardest three pounds I ever lost.”

[If you missed them earlier, there is more of Aunt Edith's story, in chronological order, at these links:]

ribena @ 2003-09-16 said:
Warmth is exactly the word, both the image and the story. I was wondering when, and how, Aunt Edith would weave back into your story. She seems to be as much a subject here as you.

roomwithaview @ 2003-09-17 said:
Following Aunt Edith here has been a very heart warming journey. She is still so lovely here. Intelligence and warmth exudes from all her photos.

Aunt Edith is one of my favourites. She obviously had a great sense of humour and still look incredibly good at 80. She makes me feel like it's an age I can look forward to.

Oh, Ronni, she's beautiful! If we could aspire to look half so good, we could look forward more. And, she was a humorous sage. A potent combination.