A Walk on the Wild Side of Munjoy Hill

Munjoy Hill, my neighborhood in Portland, Maine, is less than 300 miles northeast, as the crow flies, from Greenwich Village in New York City, and although it is far less densely populated with humans, there are more wild things of note including one, appearing yesterday on my street, so odd and wonderful that it already feels like a dream. But first… 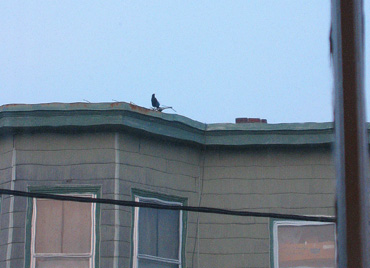 This bird may not look like much in this photo taken from my window across the street, but when they’re on the electric lines outside my window, they are the biggest, baddest, black birds I ever saw – or heard. Shrieking bluejays are pikers by comparison. I don’t know yet if these guys are blackbirds, ravens or crows, but I admire their unassailable command of their air space. 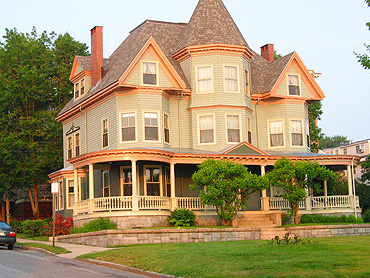 Two blocks from my house is the Eastern Prom – a walkway that runs for two or three miles along Casco Bay on the eastern end of the Portland peninsula. I frequently pass this giant, gingerbread Victorian with all those curves and corners and peaks and windows. It doesn’t matter to me what it costs to heat – if someone’s handing it out for free, I’ll take it. It is a magnificent, wild thing in its own way, don’t you think. 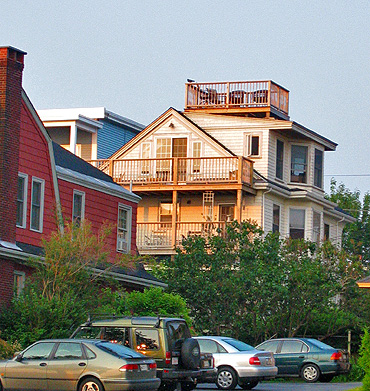 This one isn’t so massively spectacular as the Victorian except for that amazing widow’s walk stuck on top like a cake decoration. It doesn't seem to belong, but there it is and I’d like to be invited up there one day. 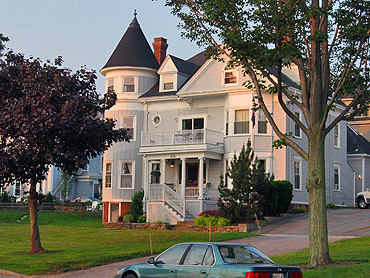 This Victorian, just a few doors down from the other one, reminds me more of a storybook castle that should be on the edge of a deep forest in 19th century Germany. Even in its pristine whiteness, it could be the setting for a Grimm fairy tale, as though there is a dark secret in the attic. 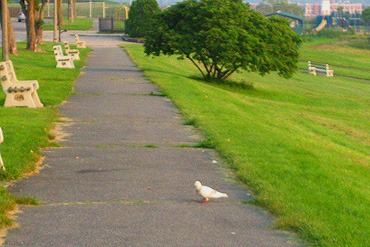 This white pigeon accompanied me one morning on my walk keeping just this distance between us. When I stepped forward, so did he. When I stepped back, so he changed direction too. After a bit of experimentaqtion to be sure I wasn't fooling myself about his pacing me, I continued my walk for about mile while he led the way. I see this scruffy black cat every day. I don’t know if he has a family or if he lives by his wits, but you can tell from his world-weary demeanor that he's seen it all and one new resident with a camera and a kitchykoo howdy-do doesn't mean a thing in his world. It's obvious too that if Ollie weren’t such a fancy-pants cat and could go outside, he wouldn’t have a chance against Blackie. 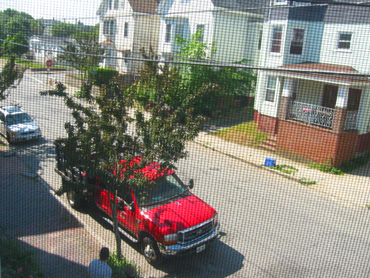 If you don’t see an animal in this photo, you’re not blind. There is none, but how I wish there were. Yesterday, mid-morning, I was at my desk in the bay windows when a moose – yes, a moose – came into view camera right.

I know, I know – it’s hard to believe. I hardly believe it now, a day later, myself. My only proof is that man in the lower left of the photo. He was shouting to anyone who could hear, “Moose! Moose! Look at the moose!”

The moose wasn’t running scared, nor was he sauntering. He trotted along as though he had a destination, went up a driveway across the street almost as though he lived there, returned to the street and continued along the block until he turned right at the corner – while I was scrambling to focus the camera.

A moose, folks. A great big, wild moose, like nothing I’ve seen since Northern Exposure, just walking along my street. Many strange things happened to me during my 37 years in New York City, but I never saw a moose there. I had to move to Portland, Maine for that to happen.

So, why are you surprised about the moose? He heard you were in town and came to see! He just got the address wrong.

Those houses are spectacular. There is a small town just south of Morro Bay, here on the west coast, with Victorian homes that took my breath away when I first saw them many years ago. I was ready to pack up and move there.

Nice pics Ronni !! A moose ? I'll bet you never saw one of those creatures in NYC eh? :)

Let's hope that all your moose encounters will be from afar - and with a camera handy!

Great photos, Ronni, thanks for showing us your beautiful new town.

We have huge noisy black birds around here that I think are grackles. Maybe that's what your friend is.

Yesterday we had a mother quail with about 10 or 12 tiny babies running along behind her in our neighborhood for a couple of hours. We got sunburned tiptoeing around in her wake watching the little family scurry here and there.

My URL for posting here is normally Web Teacher, but today I used the URL for my photo blog, if you'd like to see some scenes from my neck of the woods--and a shot of yourself at SXSW!

Delightful post - I am still chuckling :)
I agree with virginia - think your black birds may be grackles
Each of those houses look like they are waiting to become part of a story...
Thanks for the fun post

Well those old Victorian homes are indeed beautiful. The ‘birds’ however, as you’ve described them, certainly conger up thoughts about the old Alfred Hitchcock movie of the same name. Throw in the eerie looking old black cat and it starts getting a little creepy for me but of greater importance…..

Being one of your ‘male’ readers I am extremely disappointed that in your brief photographic tour you neglected to neither photograph nor point out the “corner bordello”. Even though you pointed out in an earlier post that the ‘establishment’ was closed, nevertheless, you never know when the economics affecting its operation may improve……LOL!

Beautiful pictures! I would have loved to have seen that moose!

What a beautiful neighborhood and a moose too. What more could a person ask for!

Deer are like that down near the Hill Country. Come right up into neighborhoods and trot alongside the highway like pet dogs.

But, a friggin' MOOSE?

I can vouch for Ronni, there are pictures of her moose(s) (never sure what the plural of moose is)on mainetoday.com. Moose
come into the city at least once or twice a year and cause quite an uproar!! These were very young and probably confused. You were very lucky to have seen them so early in your Maine experience!!! Some folks have lived here a long time and are still looking! As far as the black bird, he looks big enough to be a crow...they are a bombastic bunch with very pushy personalities...don't think a grackel would have shown up so well in a picture. One word of advice, keep your camera close by as you never know what's coming next...
BTW, my daughter lived in your neck of the woods for years...in an old school house on Emerson St I believe...you picked an incredible neighborhood.

Is that your nifty car in the sixth picture?
That gingerbread Victorian looks like what we see up in Manchester VT. You can see it here in Westchester....I daresay they're in loads of places. Only thing remarkable now is that there are people affluent enough to maintain the beauties. So many rich and so many more poor.

I'll never forget driving across the state line into Maine years ago. Just beyond the "Welcome to Maine" sign stood the first moose I'd seen up close and personal. What a huge welcome! Must have been arrangeed by the State of Maine Tourist Council...

I enjoyed your photos and commentary so much, Ronni. Thanks for sharing.
You made me homesick for my native New England with those Victorian homes. I've always loved those. They have such charm and each one seems to tell a story.
You have a lovely neighborhood. I'd say it was an excellent choice for you. I'd also say that moose...he was coming to welcome you and represented all the good years and memories you have ahead.

My goodness Ronni, you do live a charmed life with all those critter adventures almost before you are settled in.

I would like to have seen the look on Ollie's face if he saw the moose ;)

Ronni
I was browsing on the internet and I found this article about a "Secret Gardens of Munjoy Hill Tour" this coming week end.

I hope this works

should be a / after the

I'll take one of those turret rooms. My, what gorgeous homes!

I have similar problems with long URLs in comments and usually use Tiny URL to avoid them.

I find it so useful it now has a permanent place in my Firefox button bar.

A moose welcoming you? Amazing!
Thanks for those great photos of your neighbourhood Ronni! It looks like you're going to love it in Maine.

Love seeing your new neighborhood, Ronni. Those old Victorians are amazing. I have one in my block, too, tucked amidst the townhouses and old beach bungalows. A moose in the city! Now that's a thing to remember.

I'm brand new at this thing called blogging. Just finished reading some of the posts in timegoesby.net and am appalled at the idea that elders are being short-changed for not blogging. Unless you're very computer friendly there's a whole lot of wonderful stuff out in cyberspace you're unaware of. This 76-year old went to work outside the home in the 1950s, first part-time then full-time as my daughter had longer and longer school days. My jobs as legal secretary and then paralegal were fulfilling, short of the requisite schooling required to be a lawyer. In later years I worked from my home computer as a legal transcriptionist until cancer struck. I never considered myself a feminist per se, but simply a free thinking person. I've lived in a number of States and have a few old biddies I maintain contact with, sadly none near by. I guess that means my friendships will blosson through cyberspace.

The comments to this entry are closed.